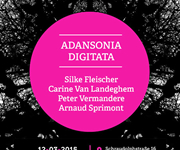 At some point you look in the mirror and ask:  who is this person? What happened on the way, how did you get there? Did you grow up?   Is this still you or is this somebody else? You look to this image from different angles,  like from somebody else’s viewpoint.  You reflect. Who do you see?

P. V. works with real matter. He is a firm believer in serendipity, he makes unforeseen discoveries while (re)searching something else. Maybe because of his name (Gr. Petros = rock) or maybe because of  childhood memories, his main inspirational starting point is stone and the various geological processes by which rocks are formed. He even tries to make his favorite metal, aluminium, look like stone. Number 7 has a biblical significance and it also corresponds to the days of the week, repeating themselves endlessly in a loop… - over and over and over … .  A repetition that is being reflected in the new work by Silke Fleischer, as the routine of the everyday. The presented jewellery works refer to settings and actions and are questioning a break through this daily routine. My work offers the observer different aspects,  opinions and views on the eidos (shape, stature). It reflects what the mind wants it to be. My Body Is A Chaotic Forest

Using modern techniques, ranging from nano-scale imagery to satellite views, A. S. challenges the boundaries of his body and his perception of the world around him. The study of pseudomorphosisms is echoed in the perception of his own experiences. Reflecting and blending scales back and forth,the infinitely large finds meaning in the infinitely small, where an abyss of possibilities opens itself up to him.